See if I Qualify
From mild queasiness because of something you ate, to the debilitating side effects of potent chemotherapy drugs, nausea has a multitude of causes. In many situations, nausea and vomiting are temporary and can be treated with home remedies or over-the-counter medicines. But when nausea persists, it can have severe consequences, including dehydration and damage to the stomach and esophagus.

A number of medications can be used for chronic and severe nausea treatment , but recent research indicates that cannabis may be more effective for managing nausea without the side effects of many prescription medications.

Nausea is a symptom, not a disease in its own right – an indication that the body is facing challenges from a variety of sources. Nausea is a result of messaging in the brain’s dorsal-vagal complex, a system that sends nerve signals between the brain and the digestive tract in response to signals in the blood, or from external cues.

Nausea is often caused by outside agents, such as bacteria in spoiled food, allergic reactions, and viruses, like the flu. Nausea is a side effect of many medications, and it can also be caused by hormonal changes. Diseases of the liver, pancreas, or bowels can also cause nausea, and so can tumors of the brain. Nausea can also be a symptom of migraine.

Nausea can have non-physical causes, too. Many people experience nausea during stressful or anxiety-producing situations. Strong emotions, like grief and fear, can also cause it. Motion can trigger nausea, as in car and sea sickness, as can vertigo and balance problems.

Because nausea has so many causes, nausea treatment can vary widely. In many situations, home remedies like ginger tea can help, and so can over-the-counter medications. For severe nausea and vomiting caused by cancer treatments, stronger anti-emetic drugs and other kinds of medications may be used. But cannabis, particularly compounds containing some percentage of THC, may be more effective for relieving nausea, thanks to its effect on the body’s dorsal-vagal complex.

How Can Cannabis Relieve Nausea?

The human body is home to a large network of cell receptors called the endocannabinoid system. These receptors are activated by cannabinoid chemicals naturally produced in the body and brain, and also by the very similar compounds in the cannabis plant. The endocannabinoid system helps to maintain balance among the body’s many subsystems, including the dorsal-vagal complex that handles signaling between the brain, vagus nerve, and digestive system.

Researchers think that compounds in cannabis, particularly THC, can bind with endocannabinoid receptors in the dorsal-vagal complex. There, they can promote the expression of calming chemicals, like serotonin and dopamine, which work to “damp down” the signaling that triggers nausea.

The connection between cannabis and nausea relief is so strong that the FDA has approved two medications based on synthetic cannabinoids for managing chemotherapy-induced nausea. But natural cannabis, with its full complement of compounds, may be more effective, with fewer side effects and complications.

Patients with Nausea Qualify for Medical Marijuana Use in Utah 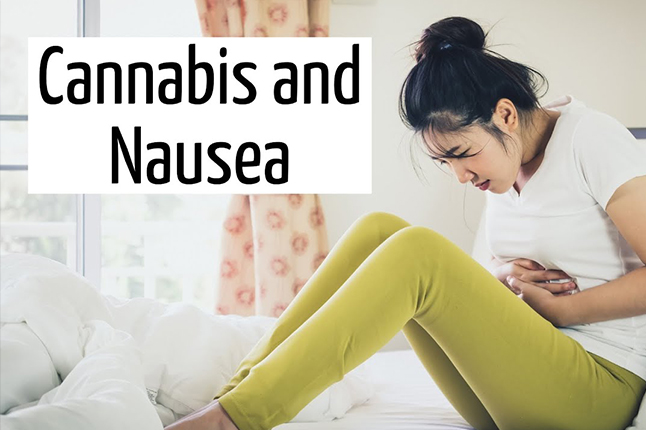