Loni and Paul from Buddy Jane join us from Southern California on this episode of the podcast to talk about their brand new social media app for cannabis users.

Loni and Paul are introduced and explain the Buddy Jane app [01:07]

Loni and Paul join the podcast from Southern California, where recreational cannabis use is legal in some counties, to tell us all about their brand new social media app for cannabis users, BuddyJane.com.

It’s a social app that was developed by a couple of ‘grown stoners’ who looked at the landscape of tech and cannabis and saw there was nothing that allowed like-minded people to interact. So BuddyJane can be described as “an IG that got pregnant by Weedmaps and had a party with a bunch of people!”

When people access the app, they are asked if they are 21 (or 18 with a Medical Cannabis Card), but the app is for everybody, not just Medical Cannabis patients. It is global and already has users in Europe, the UK, Australia, Asia, and South America.

They’re starting to see a global connection of the cannabis community. This is particularly relevant since Facebook and IG flag and delete cannabis content, and delete/kick users off the sites— as they did to comedy duo Cheech & Chong. This censorship in mainstream social media was one of the reasons they started BuddyJane – to give the cannabis community a voice that won’t get muted.

Tim confirms that this constitutes a significant difficulty in running a cannabis-related business, or allowing business owners to educate or promote using the words cannabis or marijuana. This pertains across the board, on Instagram, Facebook, Google, YouTube, and Twitter.

Is Loni and Paul’s app going to allow their users free expression, or will it be under moderation? [08:21]

The app is monitored to a degree, though they do want to represent the counterculture that cannabis represents. They’re not allowing any pornography, overtly sexual content or any illegal activity on the app.

Their users have to operate with verified business accounts before they are allowed any sort of sales activity. They want to create a safe environment and support the people that put in all the work, money, time and energy that it takes to run a legit cannabis business.

They’re a small startup, though it’s grown a lot faster than anticipated. They have a couple thousand users already and have begun to build a community. Some people who have joined Buddy Jane have become brand ambassadors and are helping them monitor the community (a way to self-police the app). They have already needed to turn away users trying to sell cocaine and guns.

The cannabis community has many patients who use cannabis for medical reasons; and it has a culture of enlightened business with an honest and positive vibe that they want to protect and foster. To keep it that way, they will kick off any ‘cockroaches’ that threaten the ethos.

How closely have Paul and Loni been involved in the creation of Buddy Jane, and what had they been doing beforehand? [11:16]

Every decision that has been made on this app has been a decision by Paul and Loni. They have a team that does the technical support and coding, but every click, every module, every wireframe, every piece of the app requires their direction and approval.

Before Buddy Jane, Paul and Loni had been in the software world working on complex projects. Having worked successfully on projects before, they started looking at the cannabis landscape and detected a void (and opportunity), leading them to jump in and start development of their app.

The core of Buddy Jane is a social media connection piece, so users will find it similar to other social platforms. Loni and Paul wanted to create an all-in-one spot for all things cannabis.

The main goal is to make a single social space to connect all things cannabis. They’ve also just come out with Bud Cast, where you can live stream cannabis-related events, podcasts, and more.

Their future roadmap is pretty aggressive, and they’re currently negotiating a deal with a crypto currency company to establish reward points that users can use for discounts at participating dispensaries. In essence, they’re creating a self-sustaining ecosystem within the cannabis community that will benefit the community as a whole.

What about people in the cannabis community who want to keep a low profile and maintain some anonymity? [16:33]

They’re looking at creating a filter for those who would prefer to use the app anonymously. People are not required to reveal their identity, and the app is not selling any CBD, THC, or flower products, making it safe to use for all.

Buddy Jane is essentially just a social media advertising app that people can access for free. Users of the app have freedom to be themselves, contact like-minded people and have access to an abundance of information.

There is no problem with trolls, or people being judged. The online shop mentioned will just be for small, ancillary products (a bit like Craigslist) with no plant-based products being sold. This aspect is still under development.

What is the biggest surprise Loni and Paul have experienced so far while working on the app? [21:04]

Loni has a background in design and 3D animation. Their app has changed greatly over the year-and-a-half of its development. However, one of the biggest surprises for him was how the community immediately embraced Buddy Jane.

They developed the app with a political aim— they want the community to be aware of some of the less-than-admirable motives that lie behind the move towards legalizing cannabis (namely money and greed). The cannabis community needs to pay close attention to the laws that are being passed. Their leaders must be given a platform to be heard so that they can fight for real change and have a voice to change perceptions, ideally leading to changes in law.

That’s been one of the biggest surprises for them— how this political motivation behind the app has been so fully embraced. This creates a powerful platform to democratize the cannabis movement. Hopefully Buddy Jane will contribute to meaningful change by uniting the cannabis community in large numbers to make their collective voice heard, despite media restrictions.

How are Loni and Paul getting the word out about Buddy Jane in light of any media restrictions? [25:18]

They have an active social media presence on Instagram and Twitter. They also have some partnerships in place that will allow for larger user numbers once they officially launch (e.g. with Cheech Marin and his brand Cheech’s Private Stash that will help them in their rollout). They will also feature Cheech’s animated series exclusively on Buddy Jane.

There’s also the cryptocurrency component and strategic partnerships in place for launch. Many people who’ve joined Buddy Jane are now also promoting the app by tagging friends on IG and other platforms.

They believe Buddy Jane will release on Android early in 2021, with an established community to help it succeed.

What is their projection for their first year? [31:47]

They are projecting between a quarter million to half million in the first year, of people downloading the app. Because it’s a global app, they’re starting to see users already picking up in Europe.

The app could also be a great conduit for information about new dispensaries opening, or simply for getting in contact with like-minded people. They believe the usership of the app will just grow organically, with the enormous commercial potential of the app appealing to the canna-business community.

Are there any privacy issues? Could the feds hypothetically track somebody through the app? [35:53]

They do want people to use common sense and are not encouraging any illegal activity, so they’re not anticipating the Feds would have any reason to mess with app users. Buddy Jane is not a tool for illegal activity.

How is the development of the app progressing? [38:03]

Loni and Paul are ploughing money back into the app for further development. They are self-funded so far, though they’ve had venture firms given a closer look lately. They are not opposed to funding at a later stage, but want to retain creative control, allowing them to take a cue from the community in terms of app direction in the future.

They want everybody to ‘hop on’ and join their cannabis community. There’s an overview and a brochure for businesses that list their services. They want to bring the education, science, and business communities into one place. The app is emphatically not simply for recreational use. There are mothers on there who use CBD for their child and professionals who use it in their daily lives for medicinal purposes.

Utah is a Medical Cannabis state with just over 20,000 legal medical users. The culture in Utah is that people are looking for others who also use cannabis, and are seeking education, which is severely lacking on social media. Tim’s Medical Cannabis patients are continually looking for more science from legitimate sources.

Connect with Loni and Paul on BuddyJane.com or follow Buddy Jane on Instagram and Twitter.
Tim is at UtahMarijuana.org if people need help getting their medical cannabis cards.
Chris is at the IAmSaltLake.com podcast.

Utah in the Weeds Episode 17 – Dr. Corey Anden, MD is a Medical Cannabis Doctor in Utah

We get to find out what got Dr. Anden interested in cannabis, her thoughts on smoking cannabis and the current patient cap, and everything else in between. 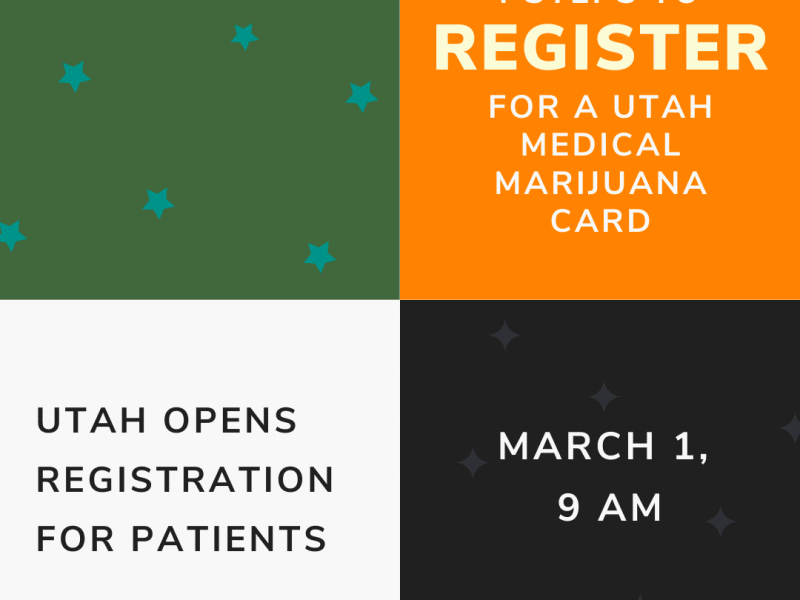 4 Steps to Register for a Utah Medical Marijuana Card

It’s finally here! Utah is opening the registration process for Utah medical marijuana card patients on Sunday, March 1st. Here is everything you need to know.