What are the first three things to come to mind when you think of cannabis? Dr. Dre? Munchies? Cheech & Chong? Loads of people, places, and things have come to be associated with the plant over the years. Heck, there’s even a holiday. We’ve likely all heard of 4/20, and many of us have even celebrated the cannabis-themed holiday at one time or another. (4/20 blaze it!) 4/20 can really refer to anything cannabis-themed. It’s a day to celebrate, a time to celebrate, and a secret code to talk about cannabis in public. (Though, at this point, it's more of a wink to cannabis use than a code.) But where did it come from? How did the tradition start and how in the world did we land on the number 420? Here are some popular theories.

Cannabis, Louis Pasteur, and The Waldos

Perhaps the most credible story of the history of 4/20 traces back to 1971 in Marin County, California. Five students would regularly meet at 4:20 p.m. to partake in cannabis near a statue of Louis Pasteur on campus. The time was chosen simply by convenience, as their extracurricular activities ended just before then. These students became known as “the Waldos,” a nickname that stemmed from the wall they'd lean on while smoking next to Mr. Pasteur. They began to refer to smoking as “420ing” so as to not arouse suspicion and would salute each other in the halls with “420 Louis!” The “Louis” was dropped somewhere along the way.

Years later, a member of the Waldos went on to work as a roadie for Grateful Dead bassist Phil Lesh, where the band helped them bring “420” to the masses and popularize the term. At a Grateful Dead show in 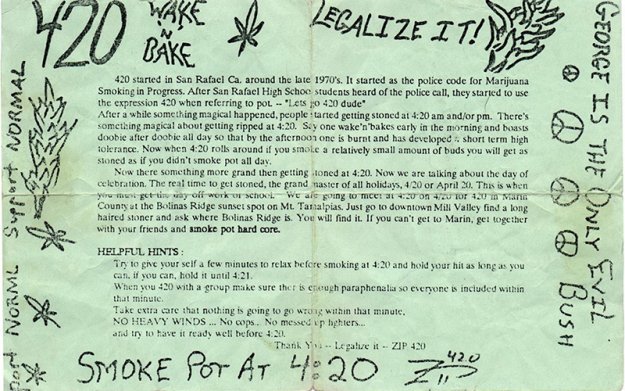 December 1990, a group of Deadheads passed out flyers to invite people to “smoke 420 on April 20th at 4:20 p.m.” (Actual flyer pictured left.) After that, the term began to spread like wildfire.

Like any good legend, the Grateful Dead story is disputed. (Though, the Waldos have some dated memorabilia to support their story.) There are people out there who are adamant that the term 420 stems from the Bob Dylan song “Rainy Day Women #12 & 35,” as 12x35 = 420. The song also features the lyric “Everybody must get stoned” in its chorus. Seems possible!

If you're like me, somebody told you when you were young that people smoke weed on 4/20 because that was Adolf Hitler’s birthday. There was some morbid story about gas chambers and hotboxing … regardless, there’s been no direct link from 4/20 to Hitler. It's also been said that there are 420 different compounds in cannabis, but this isn't the case either. The actual number of compounds is highly debated, but it's not exactly 420.

Others swear that 420 comes from the old California police code for unlawful possession of marijuana. Some say it's a penal code for marijuana use. Turns out, it's neither. "But what about California State Bill 420?" you might say. True, this bill refers to Medical Marijuana use, but the bill was named after the term, not the other way around. This was just California being a little cheeky with us.

To many these days, 4/20 is just as much a holiday as Halloween or Easter. You can attend community events all over the world to celebrate High Holiday. Many cities hold a yearly Cannabis Cup on April 20th, where hundreds of vendors can show off all their fine cannabis products or even catch a performance from such artists as 2 Chainz or Snoop Dogg, if they’re lucky. In addition to the possibility of winning the Cannabis Cup, attendees can participate in many other fun activities, such as comedy shows, marijuana-friendly speed dating, or glassware trade shows. (That's bongs, pipes, dab rigs, etc.)

If crowds and festivals aren’t your thing, don't write off 4/20 just yet. While the holiday has become a bit commercialized in its day, that doesn't stop lovers of the Kush Christmas from celebrating in a more low-key fashion without all the sponsorships and marketing. Many prefer to stay home and have a blunt (or two, or three, or four) with friends. (Remember, no blunts in Utah! Stick to vapes, gummies, tinctures, or topicals to stay legal.) Others who use medicinally see it as just another day of medicine, but use the day to be grateful. April 20th has a different meaning for everyone.

There are loads of ways you can celebrate this year. Make your way to downtown SLC for Dragonfly Wellness' 420 Community Celebration on April 20th from 11:00am - 7:00pm. There's said to be food trucks, giveaways, local vendors, and one heck of a good time. Our founder, Tim Pickett, will be there till 4:00 pm answering questions and generally enjoying his 4/20. Say hi to him if you stop by — he'd love to see you!

If crowds and people aren't your thing (totally get it, I'll need to ease back into this crowd thing myself), you can take advantage of some of the amazing sales going on at local Medical Cannabis pharmacies. WholesomeCo, for example, is offering $100 off any order of $150 or more through May 31st with the code UTHC100. Click here to take advantage of that sale before it goes away!

If you need some help making your celebration legal, give Utah Therapeutic Health Center a call. You can schedule online to see a QMP in our Millcreek, Ogden, West SLC, Bountiful, and — coming soon — Provo locations. You can even join us at EDM CBD in Midvale on April 20th, 2021, where we'll be seeing patients for the day. Make sure to use code LOVE420 when you book to get $40 off your appointment (valid thru 4/25/21). All of us here at UTTHC can’t wait to help you feel better.

What's your favorite 4/20 origin story? Comment below, especially if you’ve heard of one not mentioned here. We love a good urban legend. And please, however you choose to celebrate 4/20, do so responsibly. Happy holidaze.

Finding the Best Cannabis Strain for Your Pain Treatment

Do Medical Cannabis Patients Have to Worry About Drug Interaction? 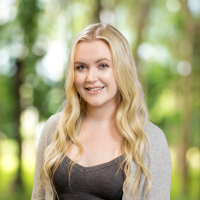 Thank you for getting it together for us!!

Thank you for getting it together for us!!